In the middle of yoga one Wednesday evening in March, I received a text from my good friend and neighbor, who also happens to be the President of our Art Society.   She asked if I ever painted on fiberglass, to which I responded, “No, but I’ll paint anything!  What’s up?”   In networking with the mall, they asked if she could help them with an upcoming art exhibit, one of the artists dropped out last minute and they needed someone to fill the spot.   The project was a painted Easter Egg display.  I graciously accepted, not thinking twice about it, or realizing what I signed up for!

The next day after work, I sat down with my sketchbook to quickly draft a few ideas.   The show was scheduled to begin that Monday so they needed a sketch that night and would deliver the egg on Friday, leaving me two full days to execute.  I threw around a few ideas, but kept coming back to spring time, with birds and flowers.   Predictable, I know, but I just didn’t have time to come up with something more creative, so I played it safe.

An important note:  Prior to this egg, I hadn’t painted anything in at least 5 years.   I had an art hiatus (see post About the Artist) and spent the last two years playing with charcoal and pastel, so I was rusty.   Also, I had never painted a bird.  Ever.  But I trusted my gut and hoped for the best!  I figured once I picked up the paintbrush it would all come back to me, and as for the birds, well, I knew I could draw the general composition of a bird, I’ll figure out the rest when the time comes!

As we scrambled (pun intended) to figure out delivery of the egg, my friend notified me that it could be an issue – the egg was 4 feet tall, 3 feet wide and weighed over 100 lbs.   I was not expecting this!  I don’t know why, but I was expecting a medium sized tabletop egg.   It wasn’t going to fit through the my front door, but as long as we could get it here, I could work on it in the garage.   We coordinated, and on late Friday afternoon it showed up, even larger than I imagined!

I was excited!  I was nervous!  I was anxious to start!  Looking at the magnitude of the egg in person, I didn’t think my original idea would translate as well on this scale.   But there wasn’t any time to waste, I had a tight deadline and an egg 4 times the size I was expecting, I’ll figure it out as we go!

I started that evening, laying the base of my design for at least 2 hours.   It was off to a good start, better than expected considering I really had no plan at this point!   I arose early the next morning and stared at it, visualizing my next move, then for the next 15 hours I painted non stop. 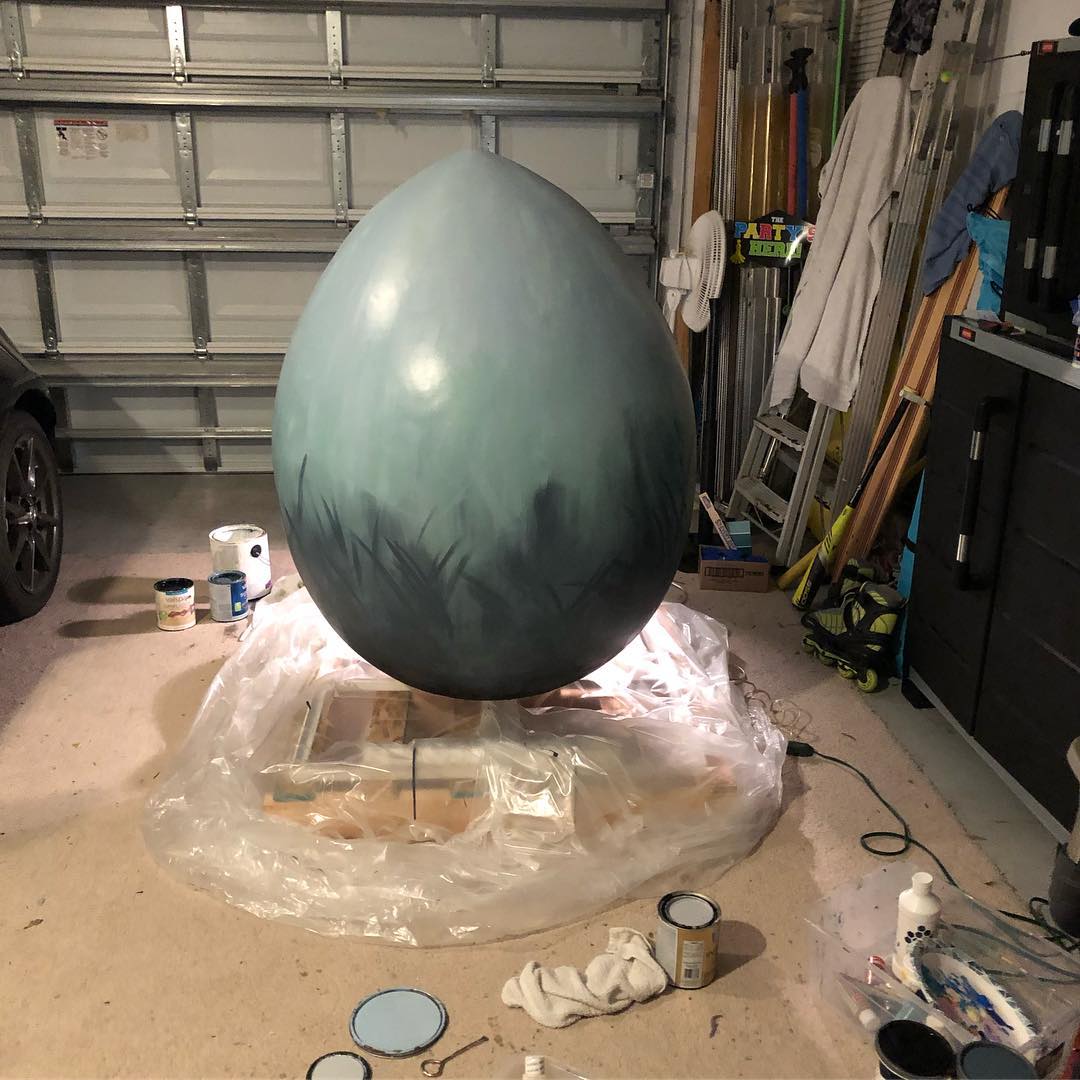 It caught a lot of attention from the neighbors as they walked by the house, some coming back a couple times throughout the weekend to check the progress.  I normally hate painting in front of people, but I welcomed their reactions and sharing the story.   One lady stopped with her family on their morning walk, she came back again that evening to check on things.  She stood in awe looking at it and said, “I don’t know you, but I’m so proud of you for doing this.”  That meant so much to hear from a total stranger.  It motivated me to keep pushing through!

During the course of those 2 days, so much changed in me.   Spring is a time of rebirth, and that’s exactly what this spring themed Easter egg did for me.  This process rekindled my love for painting – and painting on a large scale.  The last thing I painted 5+ years ago, was a mural in my powder room.  Previous to that, murals were really the extent of my practice.  I’ve tried painting on canvas, but it was frustrating.  The large scale removes boundaries and allows me to be more free.  I wanted more of this!

I had to pull several reference photos for the birds, and for the first time I didn’t compare myself to other artists.  As I researched different techniques and styles, I appreciated each one and let go of feeling like mine had to look like anyone else’s to be “correct.”   I trusted myself.  I [somehow] cleared my head and followed my gut throughout the process, feeling my way through the design that no longer resembled  my originally sketched idea.  Through it, I accepted my own style of painting.

Sunday came and I was finished ahead of schedule that afternoon.  I sat proudly on the garage floor looking it over.  I felt good.  I couldn’t believe I did it.   I had a renewed confidence in myself.

I posted it on social media, letting everyone know where they can go see it in person.  A couple weeks later I received an email from the newspaper, saying they wanted to do an article on the egg!  WHAT!  The article came out, and that night it was on the local news as well.  Friends sent me texts, and emails excited to see a familiar name in the news, sending messages of congratulations.   It was all so overwhelming!

The best part though, was seeing it on display and watching people react to it.  Kids gave it hugs, people stopped to take photos with it.  I felt so fulfilled to be able to create something that gave people so much joy!   Later that month I was doing a live painting demo at a festival.  As I talked to passerby’s I mentioned the egg and everyone who knew it excitedly whipped out their phones to show me they took pictures with it!  Again, to meet so many people who appreciated it and to hear their reactions, meant the world to me.   Not everyone is going to like the art I create, but if it touches one person in some way, it was worth creating.

The display was up for a month, and to my dismay, I learned the eggs would be painted over for next year.   It broke my heart to know all that hard work would disappear, but I didn’t dwell on it.  Instead, I decided to repaint the theme on a series of large canvas to commemorate it, titled Moody Birds (new post to come!).